I’m alive!  I suppose this is what happens when I work too much…  It’s been 3 months since my last post, so let’s get on with it, continuing from this post on my trip in the Czech Republic.

This whole trip involved a lot of driving and exploring and hiking, which are all things that I love.  Banská Štiavnica is a cute little medieval mining town about a 2.5 hour drive from Bratislava, with a population of about 10,000 people.  We even had lunch at a restaurant with an old mining shaft in it.  The town crest is decorated with a gold and a silver lizard, referring to the legend that says these lizards first led a shepherd to discover gold and silver ores.

We were hoping to get a massage to recover from our Sněžka hike, but were a bit deterred by this sign…

The goal of this trip was to climb the highest point in Slovakia, which is located in the High Tatras Mountains.  We had driven in the night before to Štrbské Pleso, a little ski resort at the foot of the mountain range, where we spent the day relaxing and finally getting that massage.  For some reason, we opted for a “local special” as part of the massage, which involved getting strapped into a contraption and being flipped upside down and just hanging out for 15 minutes upside down.  Did not like.  Do not recommend.  Will never willingly do that again.

END_OF_DOCUMENT_TOKEN_TO_BE_REPLACED

Since my surgery, I’ve pretty much been grounded: limited walking, no running, no flights.  However, there were a few trips that I went on beforehand that I haven’t written about yet, so enjoy 🙂

N and I went on a long trip in August while he had some time off, and we did it in an N kind of fashion.  I usually like to do a little research before I go anywhere, and I almost always book my lodging ahead of time because as a woman traveling in a foreign place, I at least want to know where I will be sleeping.  N is way more chill and enjoys having the flexibility of staying longer in a place that he likes.  I tried his method of traveling this time, and it was pretty cool.  We did see a lot of places I knew nothing about, however, it does require decent internet access to look things up or book lodging on the fly (as we had difficulty with while driving through the land without cell towers, otherwise known as Slovakia).

We got to our Praha 8 AirBnb late in the afternoon, visited the very educational Museum of Communism, took a nice stroll through the Old Town Square, and had a nice hearty dinner.  Prague is a gorgeous and lively city, separated into districts with the beautiful old town in Praha 1.  It’s very busy, filled with tourists and families during the day and party goers at night.  Our AirBnb was in a much quieter, more residential district that had several hipster restaurants and cafes.  We went to Můj šálek kávy for breakfast both mornings we were there.  Don’t ask me to pronounce it; I spent nearly the whole trip trying to get “thank you” (Děkuji) down…  During the day, we walked across the Charles Bridge (Karlův most), up to the Prague Castle (Pražský hrad), and then to the modern art Museum Kampa. 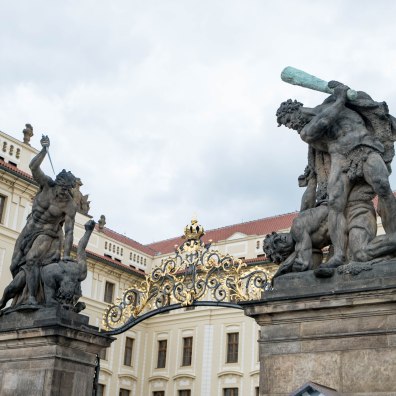 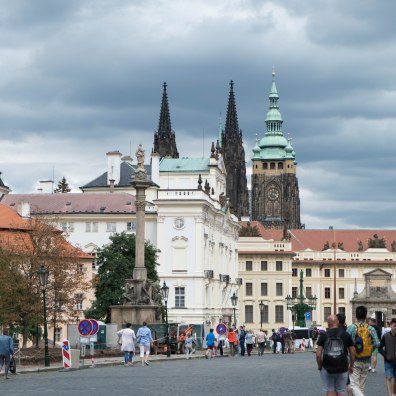 We rented a car from Prague in the morning and drove 2 hours north to the České Švýcarsko National Park in Bohemian Switzerland for a short hike.  The forest is full of boulders, like Fontainebleau in France or Mullerthal in Luxembourg, and the occasional large rock formation jutting out above the trees.  There’s an iconic formation, Pravčická brána, the largest sandstone arch in Europe.  We hiked to the touristy spot, but holy crap the spot smells like sewage due to the inn located there, and the guy running the ticket booth was so rude and the least helpful person ever.  My recommendation is to view the arch from the hiking trail and don’t bother going up to it.