I haven’t written about any of my travels in 2018 yet, and I’m not going to give excuses, but I’m here to try to catch up 🙂  In January, Nico and I were back in Europe after spending the holidays bouncing around New York and Texas.  It was a ton of traveling to be able to see all our family and friends, and we were looking forward to a week to ourselves in Spain.

Nico and I had met up a childhood friend of his and his wife and spent New Year’s in Madrid with them.  On January 2nd, we drove down to Carmona with a super quick stop through Cordoba as we were already running late.

Cordoba definitely deserved more than the roughly 1 hour stop we took.  It’s full of beautiful gardens with mixed Roman, Islamic, and Christian architecture.  We were able to walk by the Roman bridge, see the outside of the Mosque Cathedral, and the inside of the Jardines del Alcázar all while surrounded by fragrant orange trees. 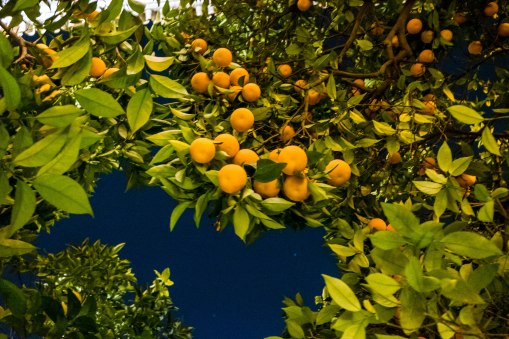 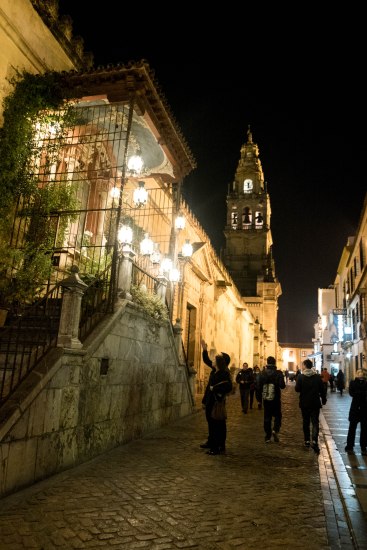 At the end of our 5 hour drive from Madrid was Carmona.  It’s a small fortressed town built atop a ridge outside of Sevilla where we stayed in a beautiful hotel from the 1500s.  There’s a lovely town center where we had the most delicious spinach and chickpea tapas.

After a cozy night in Carmona, we spent the next two days in Sevilla.  I must say, with the highest praise, that Sevilla is like the Austin of Spain 😉  Not only because it was the warmest and sunniest part of our trip, but mostly because it’s a student heavy city with a lively and colorful feel to it.  There were cute hipster cafes and tapas bars in the area by the Metropol Parasol that just made me want to live there.  Aaand that’s the main thing that reminded me of Austin, but I could have also been a little home sick.

On to the tourism!  We went to the Seville Cathedral (officially the St. Mary of the See Cathedral) that contains Christopher Columbus’s remains, and then walked up the bell tower, Giralda.  Unlike a regular bell tower, the Giralda has ramps instead of steps, which was for officials riding horses up back in the day #oldschoolelevator. 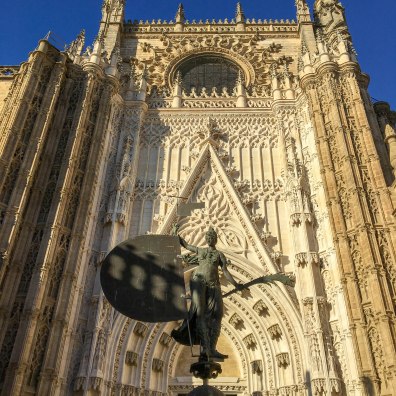 View from the Giralda

Speaking of horses, there are horse carriages all over the place, which also meant horse poop everywhere, so watch where you step…

Continuing our walking tour, we went around the gardens by the Plaza de España and then down by the river in the El Arenal neighborhood.  Across the bridge, we went to Cafe-Bar Altozano de Triana for a snack and got Papas Aliñás, with a yummy homemade tomato salsa with lots of oil and spices.  Highly recommend.  Especially if you need a pre-dinner to tide you over until dinnertime, which starts at 9pm. 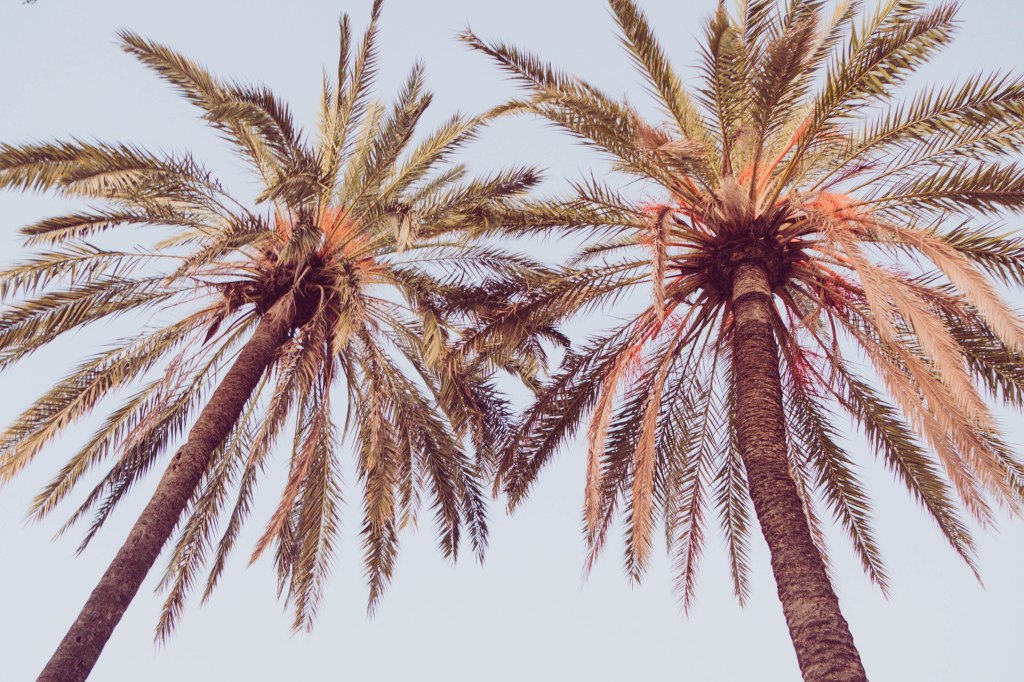 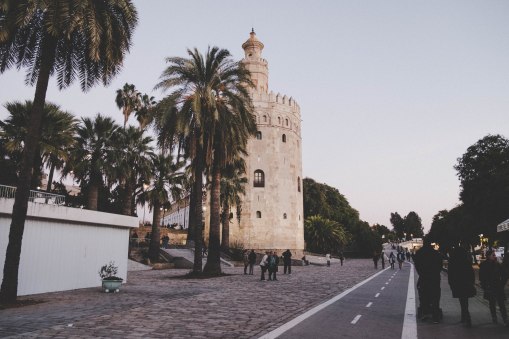 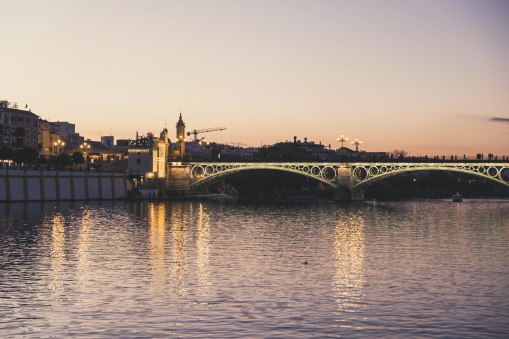 Because we didn’t purchase tickets ahead of time, we waited in a long line to enter the Real Alcázar de Sevilla.  Eventually we hitched ourselves onto a tour guide group to get in faster, and then ditched them after we got in.  The palace, where the royal family still uses as their official residence, has beautiful gardens, ornate frescoes, and many many tourists. 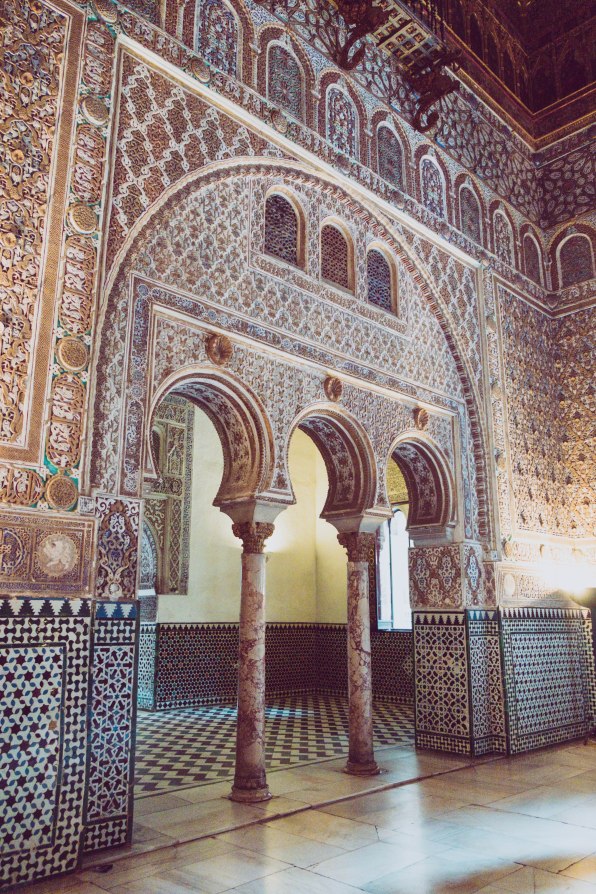 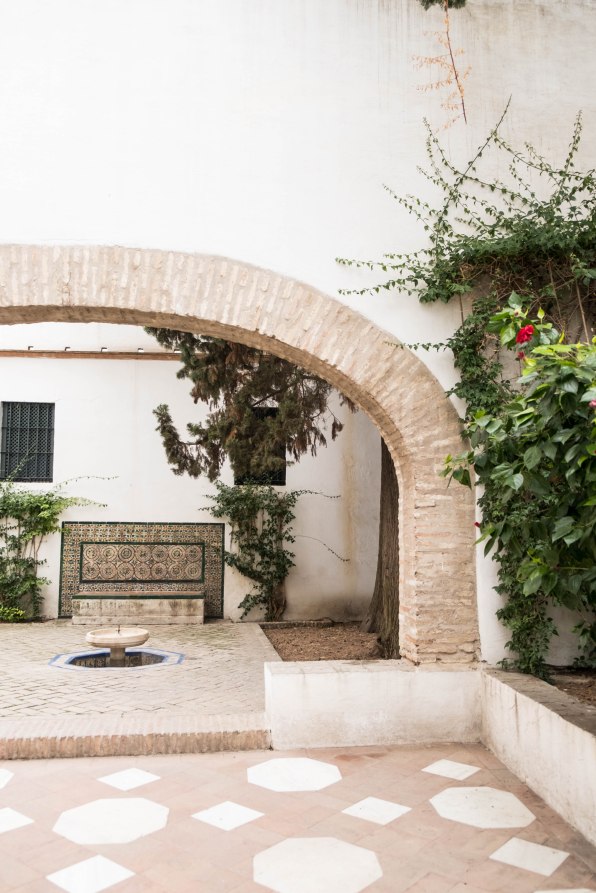 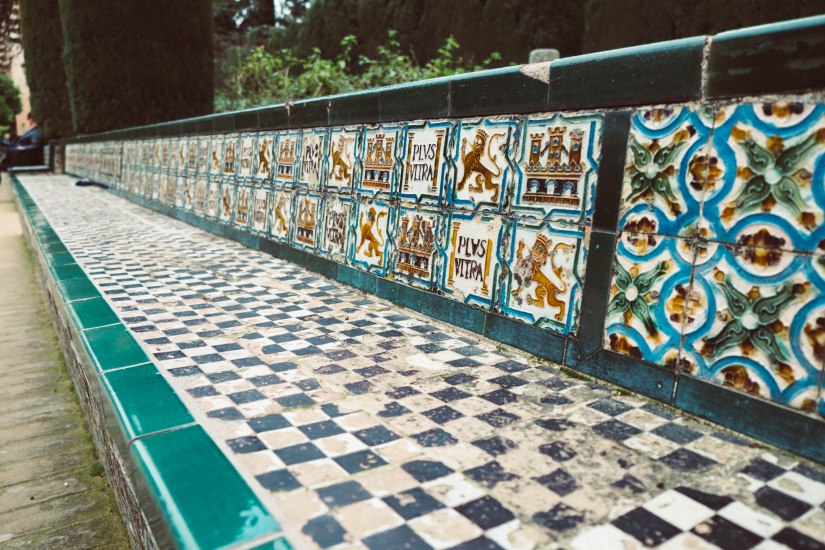 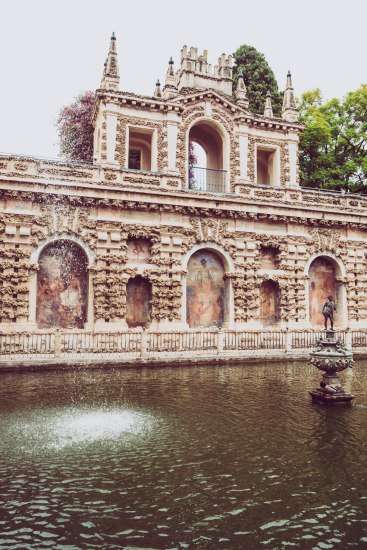 After a quick dip into an archaeology museum, we had dinner at conTenedor, a cozy and vibrant slow-food restaurant by our hotel.

It’s about a 2 hour drive from Sevilla to the Caminito del Rey, where we had booked tickets in advance for a specific time slot.  Previously known as the “world’s most dangerous walkway” following five deaths in 1999 and 2000, the walkway was closed for extensive repairs and renovations, reopening in 2015.  You can see the old walkway beneath the new walkway in the pictures below.  With the new walkway, you don’t even need hiking boots, any comfortable shoes are fine.  You can choose to go with or without a guide; we went without in order to go at our own pace. 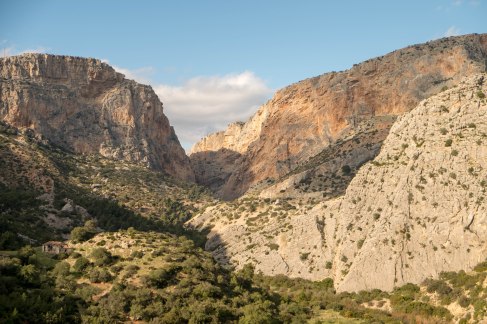 View from the path

Start of the Caminito del Rey 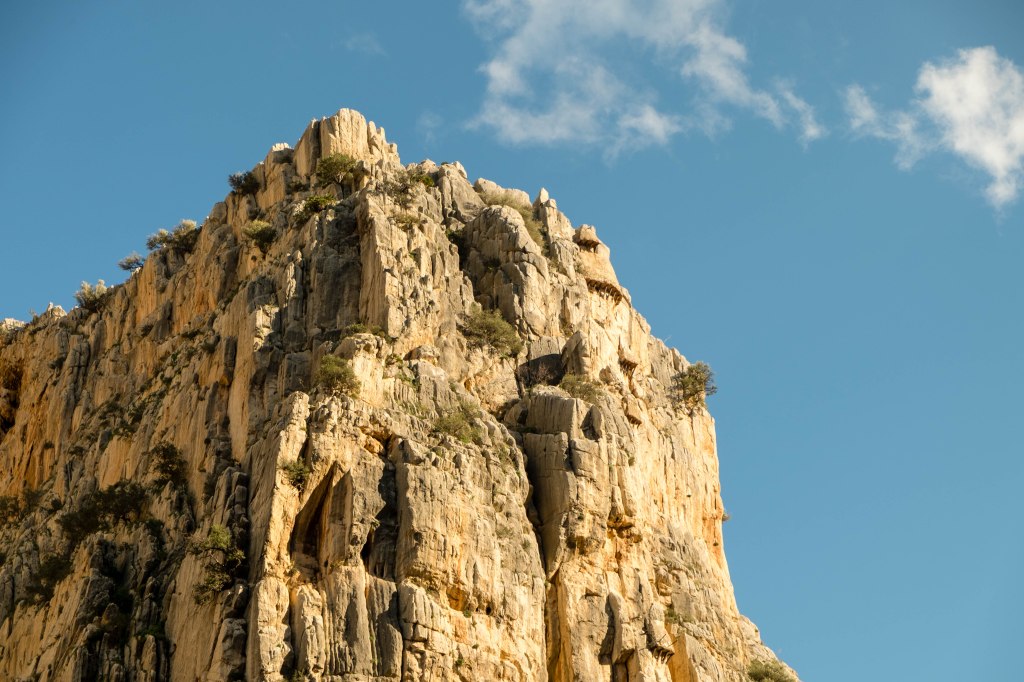 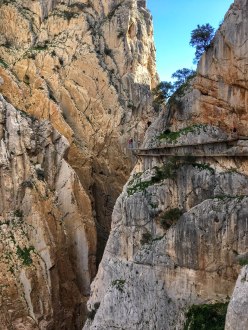 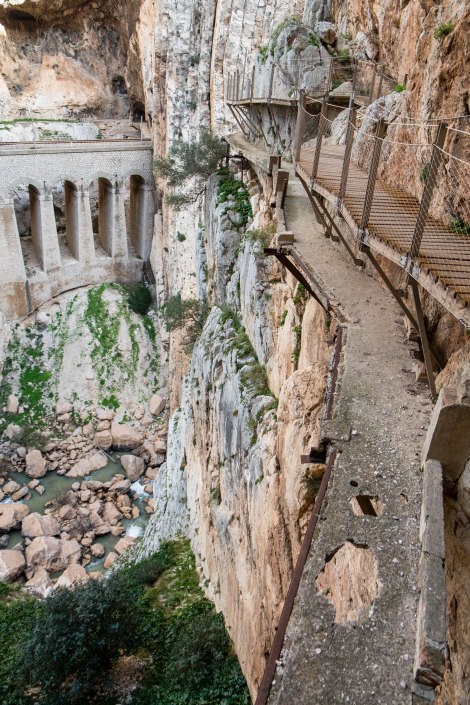 After the refreshing hike, we drove to Monachil, a little town tucked into the mountains by Granada.  We had arrived on Three Kings Day, but unfortunately missed most of the parade, where there were floats, marching bands, and street performers.

In Monachil, we stayed in an Airbnb cave house where we woke up to snow and rain.  Omg.  This was not what I pictured for a southern Spain holiday.

We bundled up and drove the 20 minutes into Granada to check out the sites.  First, we tried to go to the Granada Cathedral, but it was closed for some reason (lunch, siesta, mass?).  We took shelter from the snow in a cafe across from the cathedral and ordered some lunch.  It was quite expensive, but that’s because we ordered real dishes.  As we later learned, in Granada, if you order a drink, any drink, you get some tapas along with it.

When the cathedral reopened, we carefully crossed the slushy, icy plaza to check out the interior where €5 will get you entrance and an audio guide. 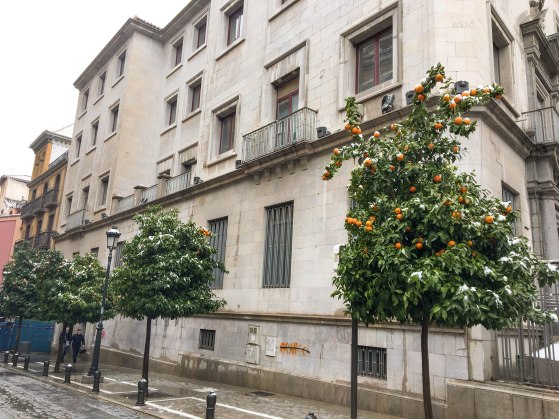 After the snow stopped falling, we walked along the river, passing by many little arts and tourist shops.  We also walked up the hill to check out the view from Mirador de San Cristobal, where you can see a panoramic view of the old town and the Alhambra.

Back in Monachil, we went to Cafe Barberia for dinner where €19 got us 6 tapas plates, enough for 2 and some.  With not much else to do in this little town, we checked out another cafe bar with some live music.  Along with our beers came MORE tapas.  For anyone who knows me, I cannot turn down food, but I literally tapped out and could not eat any more.  I love Granada.

On our way back to the Airbnb, we met a sweet little calico cat that followed us inside for a bite to eat and drink.  We only had some cheese to share, but in the end, she would not leave.  We didn’t have the heart to kick her out into the cold, so she stayed the night with us and insisted on sleeping in between us 😂

Our last day of vacation, we went to the Alhambra Palace and Fortress.  It’s a huge sprawling complex and we had also purchased tickets ahead of time.  There’s a set time on the ticket where you can visit the Nasrid Palace part of the complex, and if you miss your window, you may not be allowed in, depending on how busy it is.  We went first thing in the morning at 8am, and by 9am, it was already quite crowded with tourist groups. 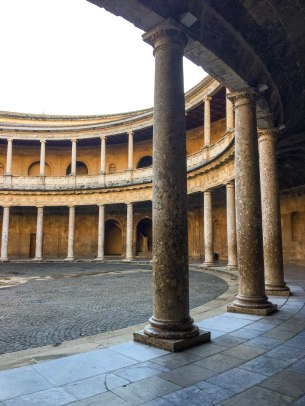 Courtyard of the Palace of Charles V 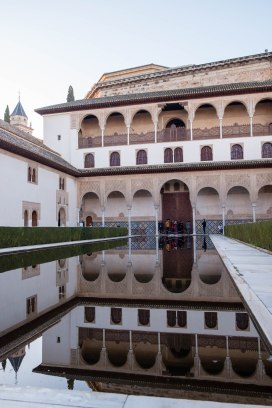 The Court of the Lions 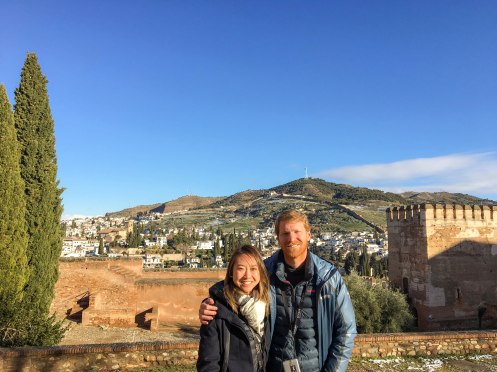 One of the many resident Alhambra cats

View of Granada from the Alhambra 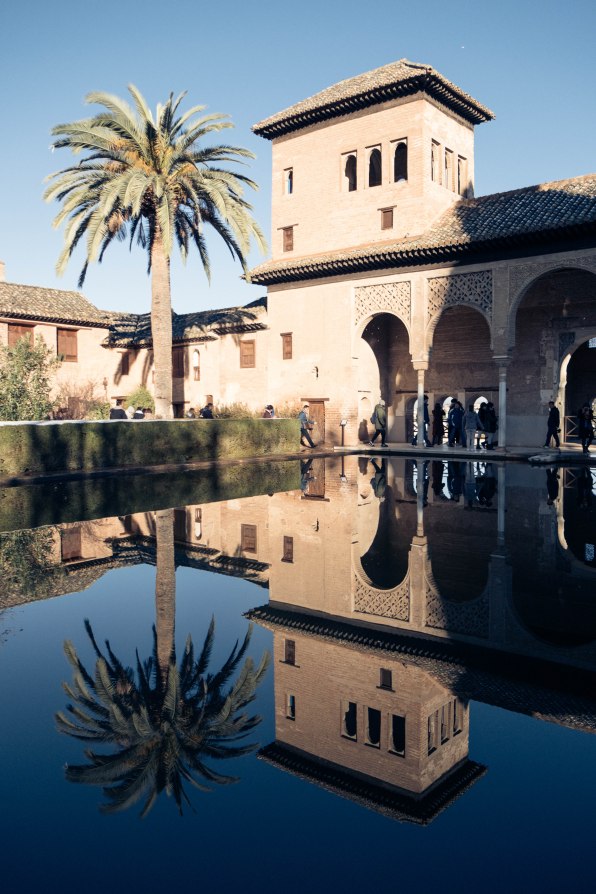 The Partal pool in the Palacio de Generalife

Throwback to the beginning of this year when I was in Andalusia. Read about it at huangee.com #tbt . . . . #fujifilm #travel #tourist #ig_europe #igtravel #travelgram #wander #latergram #spain #españa #granada #alhambra #andalucia