This is my first post about my home state, Texas!  As I detailed in a prior post, it’s not easy getting from Luxembourg to Texas.  I had taken two weeks off to be in Texas, spending one week with my family in Dallas and one week with my friends in Austin.  With my brother in California, my family tries to go on a family vacation every year or so.  My father had initially proposed going to Banff, but I was wary of adding another two flights onto my already packed itinerary.  So instead, we decided to go to Caddo Lake in East Texas.

It’s just under a 3 hour drive from Dallas to Caddo Lake across some very flat and uninteresting plains.  When you get closer to the state border with Louisiana, the trees get taller, houses start showing up on stilts, and the cell signal gets worse.

It was pouring rain the evening we arrived at our Airbnb in the town of Karnack, where we discovered that not only did we not have cell service, we also didn’t have WiFi.  We were going to have a traditional, talk to your family kind of holiday!  Although, for the rest of the trip, we made a daily 20 mile drive to Marshall, Texas, so that my parents could check their hundreds of WeChat messages, my brother and I could download books and shows, and I could reassure Nico that I had not been eaten by gators. 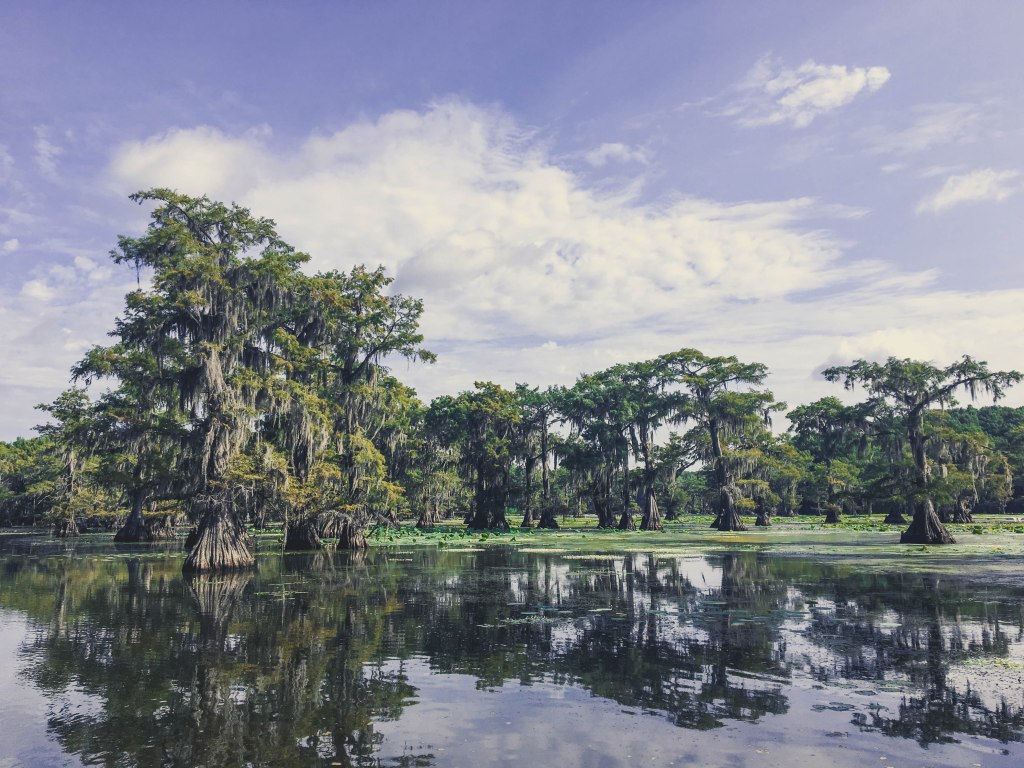 The swamp is beautiful.  Caddo Lake was created roughly 200 years ago by a gigantic log jam called the Great Raft and is one of the few naturally forming lakes in Texas.  It’s named after the Caddo Indians and is essentially a flooded bald cypress forest with an average depth of 8–10 ft (2.4–3.0 m).  It hosts an abundance of wildlife including alligators, beavers, deer, armadillos, nutria, turtles, frogs, more than 200 kinds of birds, and more than 70 species of fish.  One of these is this prehistoric looking fish called a paddlefish.  We got to watch the reintroduction of hundreds of little baby paddlefish into the lake while we were at the state park.  You can even adopt one!  I also encountered some gigantic spiders and dragonflies… shudder.  Also, mosquitoes.  So many mosquitoes… 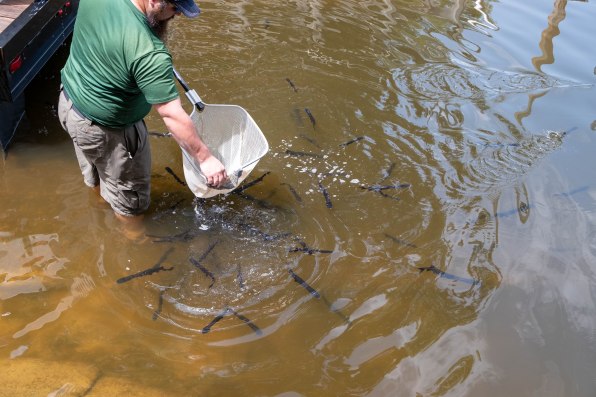 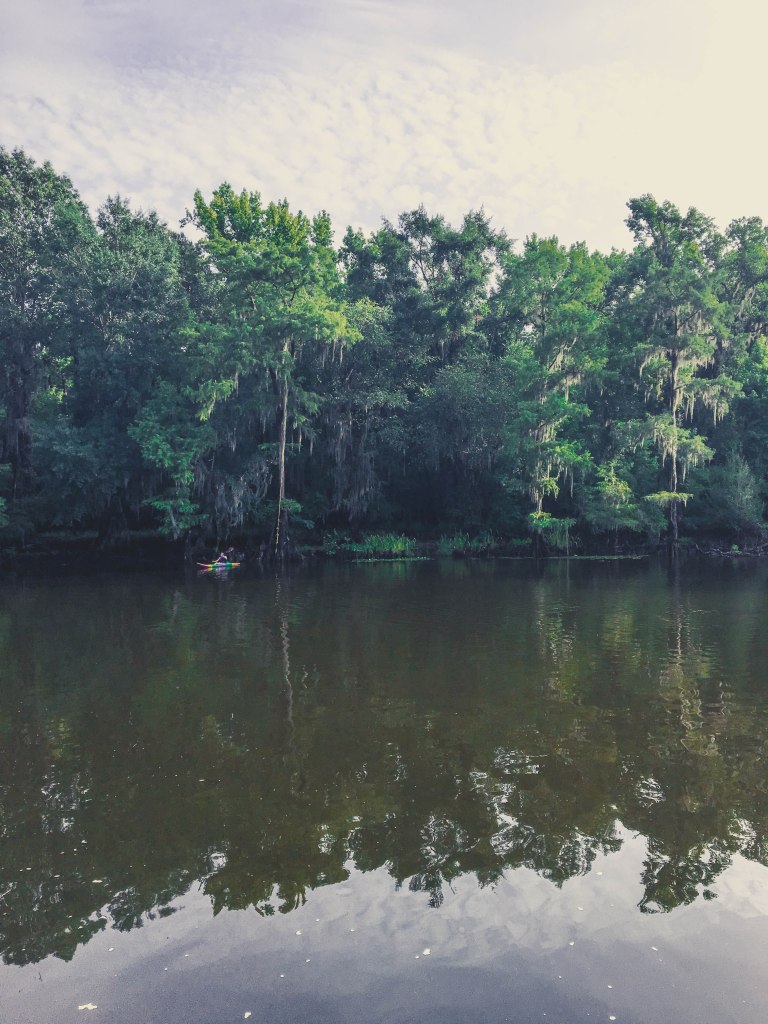 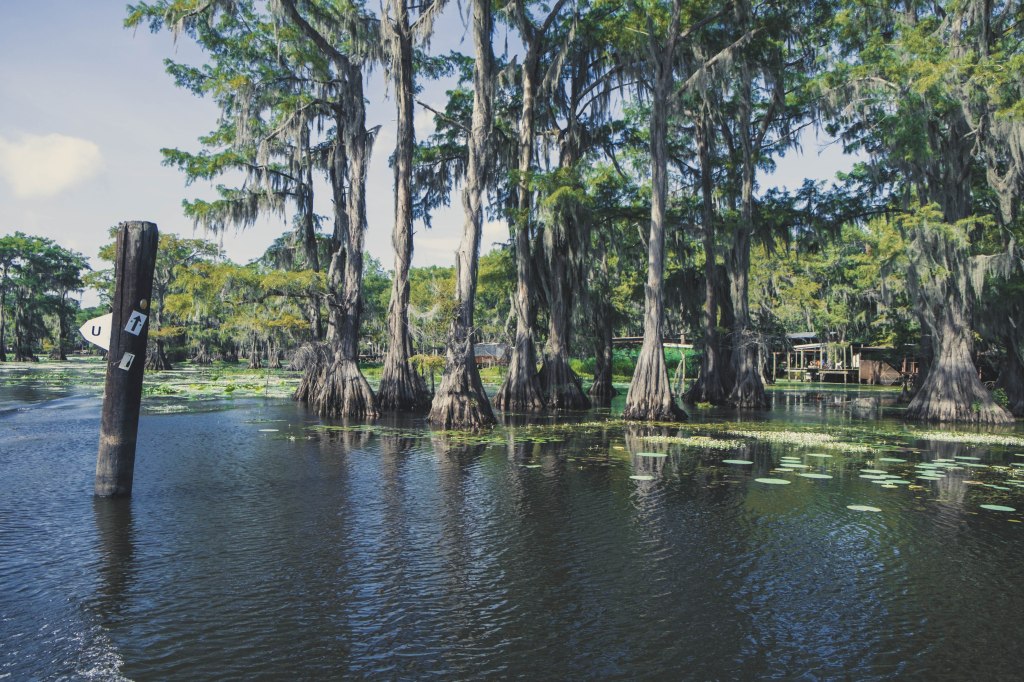 There’s a ton of activities to do in and around the lake.  We opted for a light walk, some kayaking, a lot of fishing, and a lovely and informative boat tour with Big Cypress Tours.  Turns out some of the large swathes of beautiful lily pads are actually foreign invaders.  There are several invasive species that are threatening the native species that the Caddo Lake Institute is trying to keep under control. 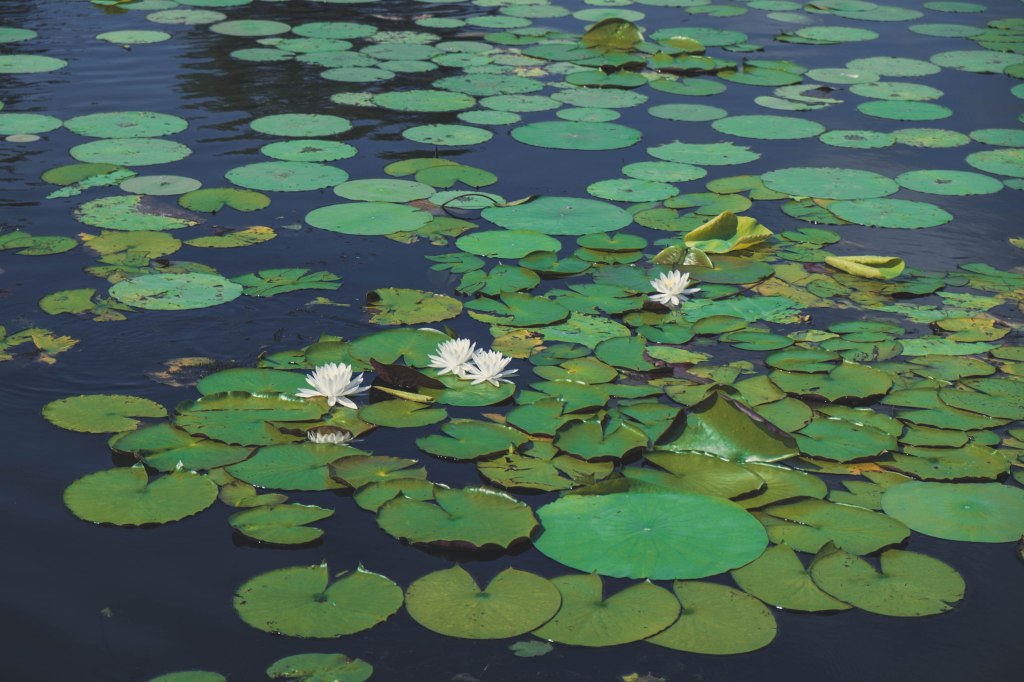 Living abroad and telling people that you’re from Texas usually garners some kind of stereotyping.  I grew up in the suburbs of Dallas, and then spent over 8 years living in Austin.  Sure, we like Tex-Mex and can’t stand the cold unless it’s icy AC on a 100 F (38 C) day, but not all of us are Confederate flag waving gun lovers… unless if you’re from the east Texas swamp.  Just kidding, I’m painting with a broad brush here, but I’ll admit I had some mild reverse culture shock coming straight here from liberal Europe.  I love Texas and everything about it, but we’re so big and diverse that you have to expect everything on the gradient.  We have a larger population than Australia, and if we were a country, we would be the 18th largest economy in the world.  However, I suppose this is the side of Texas that a lot of people think of when they think of us.  Our Airbnb was stunning, but was on a street with more than one Confederate flag waving, had the latest NRA magazine laid out inside, and had this sign hung up in the car port. 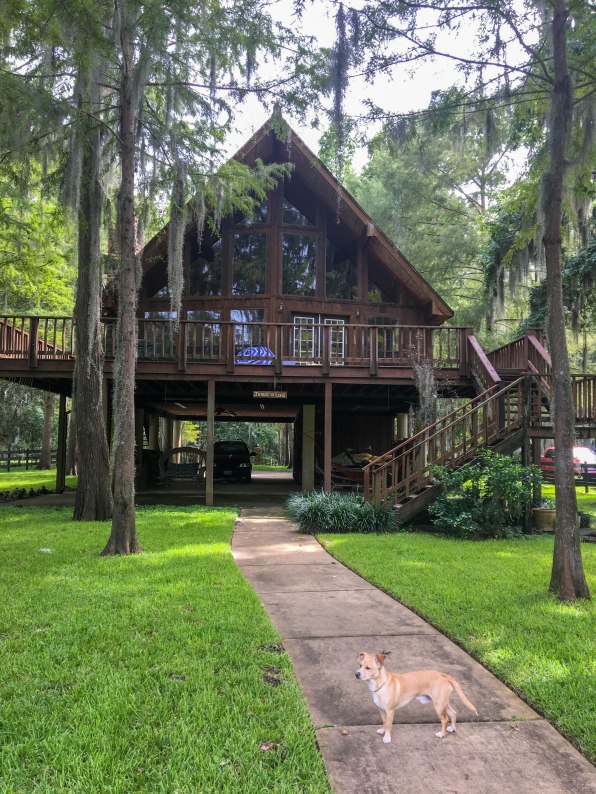 One quiet morning, my brother and I kayaked among the flooded cypress trees with their Spanish moss dangling in the breeze and saw more than one Confederate flag.  However, we also met a man canoeing with a catfish hook lodged in his back who just wanted to know which type of hook he had stuck in his back. 😶  Welcome to the swamp!